Cycling is a fine way to get around the Houston area, but it can also turn deadly.

In Harris County, there were 20 cyclists killed in 2019, 22 in 2020, and 23 in 2021, despite the best efforts of the City of Houston to make our roads more cyclist-friendly. According to police reports, the most common causes of bicycle accidents are:

While some crashes are caused by negligent cyclists, the evidence is clear that motorists bear most of the blame for bicycle accidents. When a driver causes a wreck that changes a cyclist’s life, the cyclist can pursue compensation through the civil justice system.

Drivers are legally responsible for sharing the road with cyclists

Under Texas law, motorists have a general responsibility to operate their vehicles with caution. That means driving at safe speeds, paying attention, signaling before making turns, obeying traffic signals, and so on. Many bicycle accidents occur when a driver fails to check blind spots before making a maneuver, fails to yield the right of way to a cyclist, or is otherwise negligent.

Some Texas communities, including Houston, have additional legal protections for cyclists. Houston’s Safe Passing Ordinance requires drivers of passenger cars and light trucks to stay at least three feet away when passing cyclists (and commercial vehicles must stay six feet away). The law also requires motorists driving behind cyclists to maintain a safe distance so that they can avoid collisions – there’s no specific distance required, but the motorist must take into account traffic, weather, and road conditions. 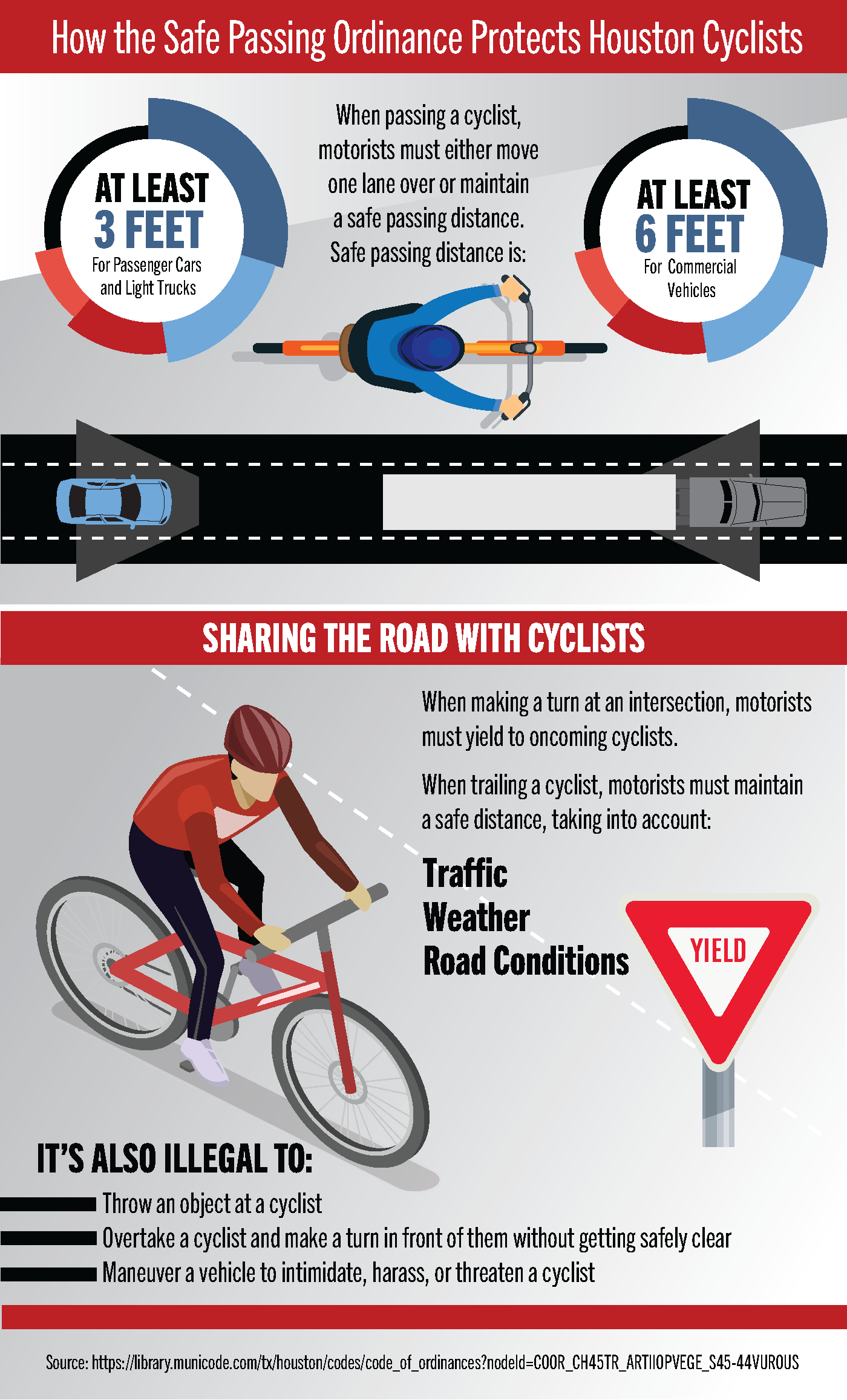 Unfortunately, drivers don’t always follow the law, and too often, cyclists are badly hurt. Because a bicycle does not provide the same protection as an enclosed vehicle, serious injuries are common, including brain injuries, spinal cord injuries, loss of limbs, broken bones, and internal injuries. The cost of a serious injury can be quite high, and cyclists have legal recourse to be made financially whole again.

Which insurance pays for a bicycle accident in Texas?

Texas has an “at-fault” car insurance system. That means the insurance company for the driver who causes a wreck is responsible for paying the damages (financial compensation) for the injuries sustained. So, if you were hit by a driver who was negligent (for example, by driving at an unsafe speed), then that driver’s liability insurance should pay for your injuries.

If you own a car and have uninsured and underinsured motorist protection (UM/UIM) on your car insurance policy, it may also protect you if you’re hit by an uninsured driver or a hit-and-run driver on your bike. If you have personal injury protection (PIP) or medical payments coverage (MedPay) on your car insurance policy, that should also apply to bicycle accidents. If you don’t own a car, you may be able to carry bicycle insurance.

Depending on the circumstances, there may be other sources of compensation as well. One of the benefits of hiring an experienced bicycle accident attorney is that we can investigate and find the available insurance to maximize your financial recovery.

What damages can you pursue in a bicycle accident claim?

The bottom line: if you were hurt in a bicycle accident that wasn’t your fault, you should be fairly compensated for everything you’ve lost. Compensation in bicycle accident claims may include:

When the insurance companies see a bicycle accident claim, they have a financial incentive to downplay the extent of the injuries as much as possible in order to pay out as little as possible. An experienced bicycle accident lawyer can push back on their strategies and find the evidence to verify the full extent of your damages.

After a bicycle accident, taking action promptly is critical. In Texas, the statute of limitations (legal deadline to file a lawsuit) is generally two years from the date of the crash. Practically speaking, however, it’s in your interest to get a lawyer involved much sooner. We need to investigate and gather evidence before it disappears, and we need time to build a winning legal strategy. Moreover, the sooner you have an attorney on your side, the sooner we can start dealing with the insurance company on your behalf so you can focus on getting better.

We represent injured cyclists on a contingency fee basis, which means there are no up-front costs. We only get paid if we win. In other words, you can always afford a bicycle accident lawyer, but you can’t afford to go it alone. If you’ve been in a bicycle accident anywhere in the Houston area, contact us today to schedule a free consultation.

Click here to download a printable PDF of "Your Legal Rights if You’re in a Bicycle Accident in Texas."