Some personal injury cases are clearly one person’s fault, and when that happens, the liability aspect of a claim is usually straightforward. However, many accidents have shared fault between multiple parties. Consider these scenarios:

When multiple parties are at fault, damages are assigned proportionally

A third party involved in the accident who doesn’t share in the fault (for instance, a passenger in one of the vehicles) could take legal action to get compensation for their losses, with 60% of the damages awarded coming from the first motorist and 40% from the second motorist. If that passenger had $10,000 in damages, then the first motorist (and thus their insurance company) would have to pay $6,000 and the second would pay $4,000.

This is straightforward enough, but what happens to the drivers of the two vehicles who are themselves partially at fault for their injuries? That’s where the “modified” comparative negligence rule kicks in. 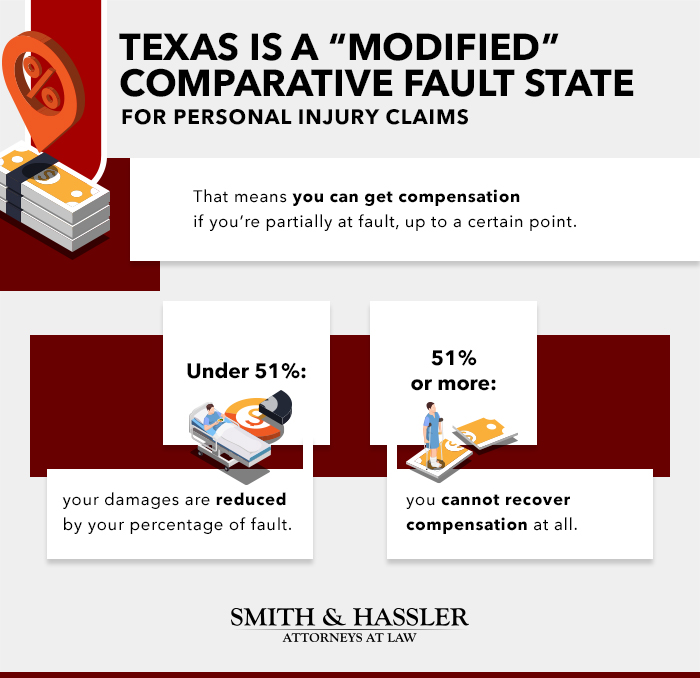 Click here to download a printable PDF of the "Texas is a “modified” comparative fault state for personal injury claims" infographic.

In cases where fault is disputed, you need strong legal representation

Whenever the phrase “comparative fault” comes up in a personal injury claim, you know you’re in for a complex legal battle. The insurance company knows that if they can argue you were 51% or more at fault, they can deny your claim entirely – and even if they can’t get to the 51% bar, any percentage of fault will reduce the amount they have to pay. Their investigators, adjusters, and representatives will look for any details they can exploit to protect their bottom line.

That’s why you need to be cautious about talking to an insurance company (even your own) about what happened in the accident. It’s also why you need strong legal representation. Your attorney can investigate your accident and build a case for the maximum compensation possible. We can give you a candid assessment of your options, with the good, the bad, and the ugly – and if you decide to move forward, we have the experience and legal knowledge needed to build strong, compelling cases.

If you’ve been hurt in an accident and fault is disputed, it’s especially important to get an attorney on your side who knows the system and knows Texas law. Contact us today for a free consultation with an experienced personal injury lawyer at Smith & Hassler.